Or. How many Grounded-s does it take to buy a pregnancy test. Or. How long does milk really last in a hot car. Or. I know it's Wednesday but would you seriously expect me to be wordless. However..

This post was written without any quotation marks because I don't feel like it. I didn't double check my other punctuation  either.

My Monday started pretty much as usual except for when the kids told me that morning, Oh by the way we get out early this week because it's the last week of school. I somehow missed this because they haven't done it before and I thought all the important stuff was over so I kind of lost interest and just looked forward to not waking up at 5 am....even though I will anyway.

Middlest informed me she would be out at eleven so I figured, ok, I would get her first then hit the grocery so that I could waste the morning playing on my blog. I then lost track of time until a quarter till when I had to hurry and get dressed to rush out the door. At 11 I texted,  leaving.  As I was pulling away she sent: you actually have 20 more minutes. Great. I was in the car so I decided to head to the store first. All I needed was a handful of things including milk and a frozen lasagna since I was planning ahead to not feel like cooking dinner.

As I headed in I get a text from Biggest. Please take me to the bank on my lunch hour.  She pulls this all the time and usually I say no because she works 2 blocks away from the bank and I'm trying to encourage her to learn how to drive but every now and then I do it just to humor her and visit for a few minutes. I told her it would have to be fast because I would have milk in the car. She said, I wanted to talk to you too. At this moment Middlest starts texting me again about getting a ride from someone else. I say, no because I'm already out and it will kill just enough time in between the store and picking up Biggest. I am wandering through he store stopping every two feet to field texts from both of them and at one point was so distracted I wandered away from the chicken legs even though I meant to buy them,  which turned out to be a good thing.  Biggest was being cryptic and Middlest was being a pain because they had wasted so much of my time that she was ready and I was still in the store.

I finally head out and get Mid and tell her to text Big and tell her we were on our way and to be ready because I have milk in the car. We pick her up and head to the bank and she says:
I kind of wanted to stop somewhere else too.
What?? I have milk.
She says, I still don't feel good, how long is it usually before you can tell.

Digress to the conversation and question I had asked her a couple days ago when she said:
I don't know what's wrong with me. I've felt nauseated all week and all I want to do is eat tomatoes. And I'm so tired all I can do is sleep.
Yeah, that question, to which I got the reply
I don't know.
So I asked it again and got the same answer, so I asked....
Have you been being careful?
You don't need to know if I'm being careful.
To which I replied,  I guess we are going to the drug store. But make it fast, I have milk.
And Middlest asked, what are you talking about?
No answer, to which she replied, Oh.... you guys suck at keeping secrets.

So we pull up at the drug store and I say I'm staying in the car to wait, I guess because I thought I could keep the milk colder that way or something, I don't really know. Biggest starts to whine that she wants me to come in and when I won't she starts a tug of war with Middlest to which I say:

No, someone she knows will end up seeing you and think it's for her and we will end up with rumors. But she persisted until I remembered my milk and told  Middlest to just go.

I sat there for about 3 minutes and then decided I was bored and would go in.
I also knew what was going to happen next.

And yes, as I traveled down the aisles I followed the sound of the giggling and then heard, oh wait, I hear mom ( I carry a big noisy key chain and pretty much sound like Santa coming) and came around the corner to find Biggest taking her phone away from her ear because she was calling me,
Which was what I knew was going to going to happen next.

She then asked, Where do they keep them?
I looked at her and said, How would I know I haven't been pregnant in 15 years.
They were standing in the tampon aisle. Yeah, wrong aisle ladies.

So we proceeded to look until we found: The pregnancy tests.....behind locked glass.
Apparently they are a hot commodity. I had no idea.
We then have a 5 minute diatribe from Biggest about how stupid that is.
So I tell her, hey, I have milk.
So we stand around and she dithers until I tell her which one to get.
Then she asks, Who opens the case?
Me: Ask at the pharmacy. 2 yards away.
Biggest: You ask.
Me: No.
Goes on several more minutes before she turns to Middlest and says: You ask.
To which Mid and I both firmly shout  answer, NO no.
Biggest: I don't want to ask at the pharmacy,  should I ask at the front?
Me: I don't care who, just ask someone, I Have Milk!!

So she goes to the front. Middlest and I stand there for a few moments before we look at each other and remember where we are standing and run to the end of the aisle to gawk in fascination at a canned tea display.
Middlest says, Tea will work. Tea, yes, that is safe and looks innocent enough.

Biggest comes back saying. I can't believe this. Half my clients are in here today. They're everywhere. I don't want anyone to see me. Please go ask..
Me: Um, No.
Middlest? No Way.
Me: I have milk.

She goes to the front and comes back and says "I have to ask at the back."

She  heads to the back and Finally someone comes to open it while she turns red and points.

Then Biggest quickly scouts for her clients and all 3 of us head to the counter while she pays for it making sure to noisily spill her change and turn even more red and call plenty of attention to the three of us standing at the counter with one item. Middlest and I making sure to hang back in case there is any doubt. As we leave about half of Middlests'  high school shows up for some reason and we narrowly escape starting  rumors.
Then she tells me that before I came in she saw a guy from school and he called her over to talk but she didn't want to, so she said, no you come here and he wouldn't and just said he'd talk to her later.
I panicked for a minute and forgot that they found the aisle after I came in and asked, did he see you in that aisle, no wonder he wouldn't come up.
She looked blank and then laughed, oh,  no....we were in the tampon aisle.
Ok,

So I say, Let's get you back to work before my milk goes bad.
Biggest:  No, I want to go to your house. Is Dad home?
Me: Yes and what about DecentGuy? He might want something to do with this.
Biggest: He said I should wait but I don't want to. I want to do it now.

Which translates in to: I Want My Mommy.

on the drive home the possibilities start to sink in and I ponder whether it is more appropriate to cry over spoiled milk......or being a Grandma.

We get in and I rush the milk to the Icebox CU and hit super cool while Biggest rushes in to the bathroom.
Then I try to act natural while I talk to my husband. Biggest comes out and I ask, are you feeling alright? No answer. Not even a nod. Her Dad calls her in to the office and shows her something he wants her to read. I keep trying to catch her eye and once when I do she just looks at me and then keeps reading. I'm about to bust a gasket and try to remain calm because she doesn't seem to want her dad to know anything. He just keeps talking and talking and she answers him and avoids my eye until their conversation is finished and silence falls for a moment before he looks at her and asks......

Are you pregnant?
Whereupon she looks up and says, NO!
What's this... ESP?
I'm just checking, he says, you guys never tell me anything.

When we are alone again she asked if it might be too early to tell and I really don't know of course because if she doesn't know the possible time frame how would I?  But I tell her I thought it would be too early for the symptoms she was describing  if it was too early to show up on a test and maybe she had a virus or just wasn't taking care of herself.

Later, I ask my husband, How did you catch on?

Him: I've only seen that look on your face 3 other times.

The milk wasn't spoiled either.

Am I Being Too Serious? Let's Go Shopping!

Getting Off The Ground

Ms. G
Motpg AKA Ms. G. If I wasn't grounded in my family and faith I would have floated away long ago. Cause I used to be a dandelion but now my profile pic changes at whim. But anyway.. I turned 50 in Oct. 2015,(I'm not updating this again so count from there) I love The SeaMonkey and our 3 daughters who are pretty much grown up now but for some reason I'm still here. Find our basics at the Who Am I? and Who's Grounded tabs at Mom of the Perpetually Grounded (which may or may not be updated)to read a little more, because I Am Wisdom and I Write This Blog.. Not really, I just like the way it sounds... 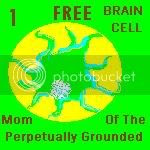